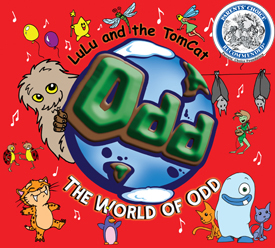 The World of Odd

Meet a cuddly sasquatch, hear Puss in Boots sing his story, and bark with the cows in "The World of Odd." With story songs, crazy critters and tales of fantasy, kids will be singing along and getting active. No one can sit still for the Stand Sit game and songs just march along with the Ants, in this 18 song recording by the multilple award-winning, children's songwriting duo of LuLu and the TomCat. Available at McNally Robinson and CDBaby.

To order The World of Odd, or to hear a preview of the songs from this CD, click here . 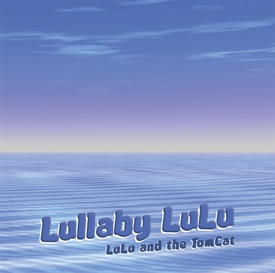 The gentle rhythm of the lullaby is magic. It washes over us like waves of cool blue, soothing and caressing our tired minds, reminding us of parental tenderness. Each of the 14 songs on this album were crafted and chosen to relax both mind and body. We hope these lullabies help children and adults float in the stream of melodies that lead them to their dreamland.

To order Lullaby LuLu, or to hear a preview of the songs from this CD, click here . 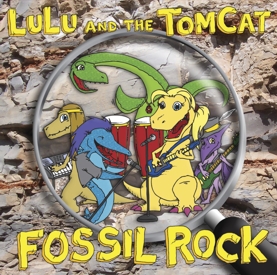 "It's called Fossil Rock. And no, it's not by The Rolling Stones. You might, however, recognize the name of the award-winning Manitoba band that created it - LuLu and the TomCat. I was pleasantly surprised. This children's CD doesn't insult adult ears... I should excuse myself from giving an in-depth description. I gave that responsibility to a panel of experts, my 10-and-a-half-year-old twins. According to them, they felt it was a "good, catchy" CD. They preferred the "fast songs," which incorporated zippy lyrics about dinosaurs... At times, my kids spontaneously danced to the tunes... the CD's worth it."
Winnipeg Free Press - Charlene Adam

To order Fossil Rock, or to hear a preview of the songs from this CD, click here . 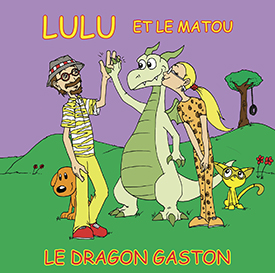 In the world of LuLu et le Matou, nothing is impossible! Here's their album of poetry, humour, dreams, dance, and of course, dragons! These melodies are so catchy, it will feel like you have always sung them, and their memorable lyrics will make your imagination take flight! These fourteen songs are for children and families who will be singing these tunes for years to come. These songs are available from iTunes, CD Baby, la Boutique du Livre, and la Librairie à la Page. Le dragon Gaston received a Western Canadian Music Award nomination for Francophone Recording of the Year!

To order Le dragon Gaston, or to hear a preview of the songs from this CD, click here .

Fairy tales, sing-a-longs, humour and an amazing version of "Flight of the Bumblebee" will tickle your funny bone and awaken your imagination as you sing, dance and laugh to catchy melodies that take you on a global journey of "edu-tainment.

"In this collection of 18 songs, Lulu and TomCat have created an environment where learning other languages and about other cultures is fun and exciting. The catchy first song, “Sunny Holiday,” teaches children how to say hello in 12 languages including Ojibwe, Russian, Italian, and Hebrew. Language literacy continues with the French songs “Quand le soleil” and “En roulant ma boule,” and the Japanese song “Canada no Iro.” There are also two songs in Spanish--”Cuando los Animales” and “Los Gatos Toucan”—and an English/Spanish song, “Un Sombrero.” Rounding out the multicultural theme is “Let’s Go Fishing,” set in Hawaii, and the “Popcorn Polka.” Other highlights include “Flight of the Bumblebee” with lyrics and the title song, “Stick to It!,” a retelling of Aesop’s “The Tortoise and the Hare.” The instrumentations and vocals are beautifully done with children often singing along. Sure to be popular in classrooms and at home, this is a must-have for all collections. " By Veronica Schwartz, Des Plaines Public Library, IL

The CD Stick To It! is a Winner of a Parents' Choice Recommended Award, an international Children's Music Web Award and, a Canadian Children's Book Centre "Our Choice" Award.

To order Stick To It!, or to hear a preview of the songs from this CD, click here .

All The Cats Were Playin'

To order All The Cats Were Playin', or to hear a preview of the songs from this CD, click here .

Dance the Hula Wula, picnic with Bears and enter the imaginary world of Award-winning artists, LuLu and the TomCat - music for the whole family to enjoy. Winner a of Parents' Choice Silver Award, a Canadian Children's Book Centre "Our Choice" award and a:

To order 321 Kadoozee, or to hear a preview of the songs from this CD, click here . 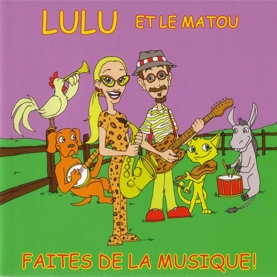 Music is a remarkable way to learn language. Everyone can sing along and learn French with action songs, gestures, participation, and chorus sing-alongs. Nominated for a Western Canadian Music Award.

To order Faites de la musique!, or to hear a preview of the songs from this CD, click here . 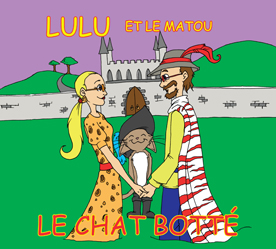 ** Nominated for a Juno for Best Children's Album!**

Le Chat Botté is a fun-filled mix of familiar French folksongs and engaging originals that get young audiences up and moving to the beat. With imaginative musical storytelling, this album automatically connects to the whimsy and adventure of a child's world and makes learning fun for all ages. The third of a trilogy of French albums (Faites de la musique! - WCMA nominee for best children's album 2009 and Le dragon Gaston WCMA nominee for best French Album of 2010), and also a WCMA nominee for Francophone Album of the Year, children, parents and educators will enjoy dancing and singing along to the creative French songs on Le Chat Botté.

To order Le Chat Botté, or to hear a preview of the songs from this CD, click here .

Reading is fun with the LuLu and the TomCat companion "Sing-a-Book" series.

Parents and teachers may click here for more information on why and how "Sing-a-Books" work at home and in the classroom.

Turn off the TV and engage your mind on your next road trip with LuLu and the TomCat Sing-a-Books for the whole family to enjoy! Its a fun and exciting way to learn!

Sing-a-Book with LuLu and the TomCat!

World of Dinosaurs
Sing about the dinosaur world where everything links together to get to the beginning again.
The Fossil Alphabet
Sing and learn about fossils as you wrap your tongue around these foccilicious words.
I want to be a Plesiosaur
Ride the waves with the greatest swimmer of all time.
Dawn of the Dinosaurs
Meet the Tyrannosaurus Rex - the biggest bully in the dino world.
Bruce
Bruce is a giant mosasaur who lives at the Canadian Fossil Discovery Centre in Morden, Manitoba, Canada. This is his story.
Go, Go Manipogo!
The Manipogo is a marine creature spotted in Lake Manitoba that looks like a huge dragon with a head like a horse. Could it be an ancient plesiosaur?
Mary Anning
Mary lived in Lyme Regis in the early 1800's and was the first person to find and describe marine reptiles. The old tongue twister, "She sells seashells by the seashore" is about Mary's life.

The Walrus and the Carpenter
a lullaby story-song adapted from the Lewis Carroll poem of the same name.
Prairie Lullaby
Music of the prairie animals, birds, wind and grasses create a gentle cushion on which to lay your head.

The World of Odd - stories from the companion CD

The Grasshopper and the Ant
This engaging, well-known Jean de la Fontaine fable is retold with flair. But the ending may surprise you!
The Octopus Boogie
Get up and dance the Octopus Boogie with Ollie Octopus and her underwater friends. The actions are in the words so everyone can boogie!
The Bison of Snow
The Bison of Snow in the sky brings peace to the fighting beaver and hare clans.
I Met a Sasquatch
The Sasquatch is very shy but also super soft and cuddly. Here's the story of how LuLu and the TomCat once met a sasquatch in Horndean, Manitoba.
Puss in Boots
All you really need in life's a cat. Puss in Boots sings about his adventures with the magical ogre and the brave princess!
The Ants Go Marching
Here's a new twist on an old story! Learn the real facts about ants through this rhythmic counting song as you march your way down to their colony together.
The Saber-Tooth Poet
The saber-tooth cat is known for his bite but his rhymes are chiseled in the Ice Age! Find out why he lives to rhyme. Kids love the cute pictures.
Teeny Tiny Boo
You'll love this Hallowe'en song with a teeny, tiny boo. Get to know the real "Boo" and meet his friends.
Go, Go, Manipogo!
Manipogo is the name of a marine creature spotted in Lake Manitoba. It looks like a huge dragon with a head like a horse. Could it be a plesiosaur?
Belle Isabelle
How do the stars light up at night? Belle Isabelle will lead you on her nighttime flight to the sky. As you hear her magical story of visiting the constellations, follow her journey through the pictures.

Other books available in French

Where to Buy CDs and Sing-A-Books

CDs and Sing-A-Books, PDF's and Copyright Licences for School use SmartBoards are available from LuLu and the TomCat (see "Contact Us" page).

LuLu and the TomCat's CDs are available online at CD Baby, Amazon.com, Amazon.ca, and iTunes, and at the following stores: